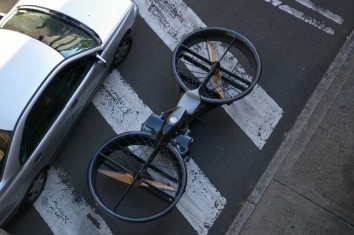 Return of the Jedi was such a cool movie and everyone has their own favorite scenes in it. My personal favorite was the scene in Endor when Luke and Leia were being chased by Speeder Scouts in their very awesome speeder bikes. I’ve always thought to myself that I’d get one of those babies the moment it becomes a reality.

Well that time may be now.

An engineer from Austalia, Chris Malloy, has spent years developing a hover bike. And after two and half years of trial and error has finally successfully made one. Malloy’s hover bike can float above the ground. No he hasn’t invented an anti-gravity field generator. His solution is much more basic though still quite effective. Malloy uses two huge  propellers to help lift the bike off the ground. The concept is the same one used in making hoverboats, though this one doesn’t look like a floating air bed and is actually not bad looking either.

The Malloy Hover Bike is powered by a 1170 cc 4-stroke engine and has enough power to provide 80kW of juice to both propellers. The power is enough to keep the whole bike floating and have enough power to spare to propel it forward. The bike is made from Kevlar reinforced carbon fiber and uses a foam core for the frame to keep it light yet strong. The whole principle of this hover bike was lifted from how the Chinook Helicopter flies, no pun intended. It was reported that the bike can fly run at speeds up to 173 mph, but no concrete proof has been forwarded just yet.

The Malloy Hover Bike will start initial limited production in about a year and will retail for $40,000. Time to break that piggy bank.