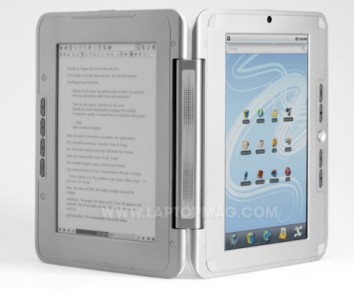 Laptop Mag have gotten their hands on an interesting eBook reader called the Entourage Edge. They find it strange though. It’s the same size and form factor as a netbook, but it’s actually two screens: one e-ink screen and the other a normal LCD screen. It’s too big to be an eBook reader, they felt, but they do appreciate the effort to make such an unconventional product.

Upon opening the Edge, the first thing we noticed is the hinge that allows for a complete 180-degree range of motion for both of the dualbook’s displays. Users can fold them back to back and use just one display at a time, lay the device flat on a surface, or place either screen at any angle, including 45 degrees; the hinge is sturdy enough to keep each screen in place. To keep the tablet from sliding (and to protect the screens) both the outside chassis and inside edges have rubber grip strips or edges. We wish there was a latch to keep the two displays together when opened, though.

The problem is that 3-pound Edge feels heavy for a device that’s meant to be held for long periods of time. Though comfortable to hold as a tablet in the crook of our arm, after about 45 minutes we felt serious strain. Holding the Edge more like a book helped, with the screens at a 90-degree angle, but the weight became noticeble before an hour was up. This may not be as big a deal for students who will likely do most of their work and reading while resting the Edge on a desk.