Remember the Microsoft Natural Keyboard? The one with the angled keys that were split right smack in the middle of the key set? This keyboard was supposed to reduce carpal tunnel syndrome and other repetitive-stress injuries (RSI). But for all the supposed benefits, I could never get myself to use one. This is because the Natural Keyboard forces one to type with a rigid method–using the correct fingers to hit the correct keys. I, for one, could not bring myself to use just the right fingers (or hand, for that matter) to hit the right key. I constantly hit Y with my left forefinger, and it’s located on the right side of the divide on the Microsoft Natural Keyboard. And I don’t use my thumb to hit the spacebar.

Call me unorthodox, but that’s me. However, I would tend to believe that majority of the world’s computer users don’t type the same way as the QWERTY keyboard’s inventors intended, anyway. You have those who peck (people who use forefingers only), three-finger typists (thumb, forefinger and middle finger), and even those who can effortly glide across the keyboard even without looking.

Microsoft probably took consumer complaints of “Hey, I can’t use this darned thing!” seriously and had to redesign. These days, the Microsoft keyboards still come in curvaceous packages, but are no longer split like Moses’ Red Sea. The Microsoft Entertainment Desktop 8000 Keyboard, for one, is a wireless keyboard and mouse set that has built-in controls for multimedia functions. 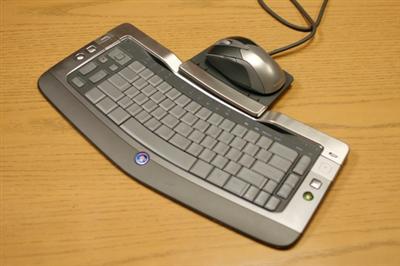 It even lights up! Probably inspired by the PowerBooks’ ambient-light sensing system, the Microsoft Entertainment Desktop 8000 Keyboard lights up when it senses your hands coming near, and turns off lighting when your hands leave the keyboard. 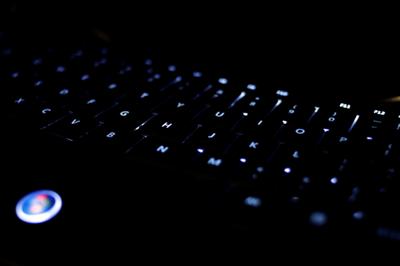 The keyboard and the Microsoft Entertainment 8000 mouse connect to the computer wirelessly via an included bluetooth dongle that also doubles as the charger, and also sports a two-port USB hub.

What’s great about this keyboard is that you can practically use your computer mouse-free, since it also includes a “clickpad” on the upper-right corner, which works like an iPod’s clickwheel or a laptop touchpad. The touch-sensitive surface lets you control the cursor around the screen. Click on the clickpad to, well, click.

Gizmodo thinks the new Microsoft keyboard is a good deal at the announced price of $250.

Other notable controls include touch-sensitive function keys, a Call button to activate Windows Live for full-motion web meetings (with the right hardware), a Media Center button on the right, and a Windows Start button. Microsoft keyboards currently include a Start-menu button, but this one is centrally-located under the spacebar, and pulses when the backlight is off. By clicking it, the Start menu comes up. Start typing, and Vista starts searching. A cool feature, since Search is the buzzword with Vista. Also, holding down the button and hitting the tab-key will reorganize your windows into Flip 3D, allowing the user to cycle through them until they find what they want.

All in all, it’s a fully-functional, fun-to-use, high-end interface package that is efficient and pleasing to the eyes and hands. The $250 price tag might be a little much for most users, but for power users or those with special needs, it’s not a bad way to go. It should appear on shelves soon, and it signals the start of many new Vista-themed accessories to come.

CNet also has a preview. What’s notable is that the proximity sensor can also be used to trigger Hibernation mode, so the computer will power down when the user is away from the machine. Vista’s “hibernate” mode is reportedly a marked improvement over Windows XP’s own sleep and hibernate features, which are considered slow.

The three keyboards, three mice and three Webcam-related gadgets are designed for multimedia lovers and multitaskers. In addition to including features specific to the upcoming Vista operating system, each also works with current versions of Windows.
Microsoft computers

Designed to be used with Windows Media Center, the keyboard has a button that takes you directly to music and movies you have stored on your PC–and has a backlighting feature for when it’s dark in the room. Its proximity sensor can detect when a user has moved away from the keyboard and will trigger hibernation mode to save battery life.

The Entertainment Desktop 8000 keyboard and mouse set are to be released this February, just in time for Windows Vista. I want one!