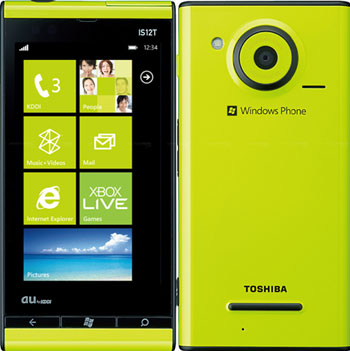 Mobile phone fans have been eagerly awaiting for news about Microsoft’s plans for mobile phone penetration with their Windows Phone. Now there seems to be some more movement.

One of the latest news about the Windows Phone is Toshiba coming out with a Windows Phone that will be carried by KKDI, a Japanese mobile carrier. Now there’s further news on that front. The new Toshiba phone, which will be called the IS12T (they should’ve used an actual name to make it easier to say and remember), will be coming out very soon and will reportedly be the first phone in the world to sport Windows Phone 7.5, otherwise known as Mango. The phones are obviously going to be targeted towards the more fashion conscious and trendy sector of the market, what with the very vibrant colors the phones will sport when it goes on sale.

The Toshiba IS12T will reportedly be dust and water resistant and will only weight 113 grams, which will make it one of the lighter phones on the market – in fact, it will be as light as the Samsung Galaxy S2, currently the lightest Android smartphone. The phone will also sport a 13.2 megapixel camera, a massive number of megapixels there for those who are still impressed with these numbers. The feature set is nothing to sneeze at so it will be up to Microsoft’s Mango to entice phone users to check this new phone out and decide whether to jump ship to Microsoft despite the huge popularity of the iPhone in Japan and Android’s growing market share. Microsoft is banking on a number of innovations with their Windows Phone OS and they’re also hoping that the snazzier GUI of the Windows Phone will have whizz and bang to attract buyers, not just in Japan but all over the world as well.