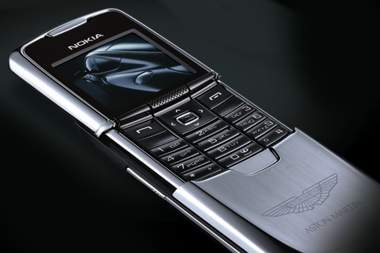 This exclusive version of the phone will be manufactured in strictly limited numbers, and features a discrete laser-etched “Aston Martin” logo on the stainless steel casing.

Personally, I’m not impressed with the phone as it’s basically still the Nokia 8800 with just the design change (the etchings) and some added content. It’s still your good ol’ 8800 that has 64MB of internal (non-expandable) memory, and multimedia playback capabilities. What’s great, though is that the phone will have smooth synchronisation and connectivity with all Aston Martin models via Bluetooth. Your hands-free calling will be fuss-free. But then, you’d have to have an Aston Martin. If not, you can perhaps settle for having the sound of an Aston Martin V8-engine revving up as a ring-tone (which comes standard with the phone)!