Microsoft chairman Bill Gates was cited to express preference for mobile phone technology over low-cost laptops to address the need for bringing computers closer to the lower market segments and developing economies.

This is in response to the plan by the MIT Media Lab to build a US$ 100 laptop, which shall then be sold to developing countries for use by students. Microsoft and MIT Media Lab were in talks for the possibile use of a Windows variant to run the laptop, but no consensus was reached (the laptop will be using an open-source operating system, as originally planned).

[Gates believes] … that turning a specially configured cell phone into a computer by connecting it to a TV and a keyboard is the best way to spread the power of computing. 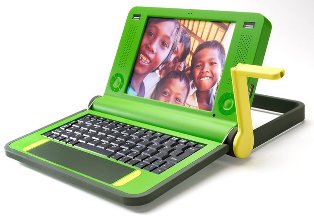 True, in developing nations, even the lower market segments have access to mobile phones. Having a mobile has become more of a necessity rather than a luxury, in most societies. Hence, there may be merit in Microsoft’s focusing on mobile phones instead, in introducing computing to the masses.

But a US$ 100 laptop that doesn’t need plugging in to the mains sure is cool!