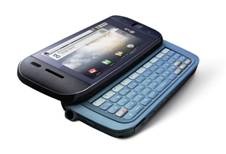 It doesn’t have a sexy name, though you know it’s from LG — the LG-GW620 is the first handset from the Korean company to embrace the Android open source mobile operating system.

Featuring three inches of obligatory touch screen plus a slide out QWERTY keyboard, there’s something very “Nokia N Series” about the design.

Disappointingly, LG is keeping very quiet about the handset’s other features, though the mention of the phone appealing to first-time smartphone customers does suggest that it will sport more basic functionality. Of course, being Android powered means that it has access to the thousands of applications already available.

The LG-GW620 will be available towards the end of the year.

Don’t like Android? LG has also announced its intention to launch at least 13 Windows Mobile driven smartphones over the coming 16 months.