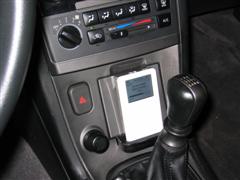 The Tesla all-electric roadster is indeed noise-less, even when you suddenly feel yourself lead-footed and zooming the freeways at 130 MPH (hey, is that even street legal? Tesla says the car is!). So what’s the best way to while the time driving if you can’t even hear your engine screeching. No, it’s not great to listen to that backseat driver bellowing commands (the Tesla doesn’t even have a backseat). The best way is to listen to some music.

All right, this isn’t the Tesla we’re talking about, but auto manufacturers are now warming up to the idea of having built-in digital music player compatibility/integration. Just recently, Ford, General Motors and Mazda have teamed up with Apple for built-in iPod integration on their cars.

GM and Mazda will offer iPod integration on all new models, Apple said, and Ford will offer it on many of its Ford and Lincoln Mercury models later this year.
…
Ford said Thursday it will offer the iPod integration as a dealer-installed option called “TripTunes Advanced.” An adapter that doubles as a battery-charging station would go in either the glove box or center storage console. Users would then be able to control the iPod through buttons on the steering wheel or the radio. Playlists, artists, and other song information will also be displayed on the cars’ systems.

And it’s not only for the iPod, but most other portable digital music players shouls also be supported in due time.

In addition, Ford plans to add auxiliary audio input jacks on nearly half of its lineup, starting this fall. Tunes from any gadget — iPods, other MP3 or CD music players, cell phones and game handhelds — will then be playable on the cars’ audio systems without the need for extra adapters or FM transmitters.

Of course, the first consideration here is safety. There are studies that say fiddling with your car’s audio system is as dangerous and distracting as talking on a cellphone. Perhaps this is why early adopters like BMW have placed volume and tuner controls on the steering wheel itself.