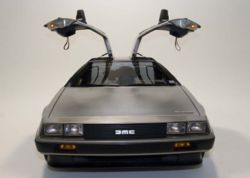 Among cars made famous by Hollywood, this is by far one of my favorites: the DeLorean DMC-12 from Back to the Future trilogy, or simply known as the DeLorean. It’s not so much the technical capabilities of the car that make it noteworthy. In fact, it was criticized for being underpowered–particularly in the US model, because of stringent emissions requirements, which usually severely impair power. However, the DeLorean has become a cultural icon, not only because of the Back to the Future movies, but also for its unique design.

The DMC-12 is a sports car manufactured by Irish carmaker DeLorean Motor Company, but intended for the US market. It is actually the only model that DMC was able to produce and market. The company itself faced financial troubles from the start, which led to bankruptcy and ending of production just about half a decade after starting business. Only about 8,500 DMC-12s were ever produced.

The DeLorean is unique for its gull-wing doors and brushed stainless steel body. The gull-wing doors allow the occupants easy access in very crowded parking spaces, since the door would only extend laterally (sideways) by 11 inches. Most of the movement is upwards. As for the brushed-metal surface, all DeLoreans come off the production line unpainted and without clearcoat. How’s that for a unique automobile?

The DMC-12 is powered by a V6 Peugeot-Renault-Volvo engine mounted in reverse at the rear of the engine, which is also an unusual setup (most cars have front-mounted engines, while most other sports cars have mid-engine layouts). The DMC-12 is a rear-wheel drive engine, and this rear engine layout helps in traction (but not so much balance. 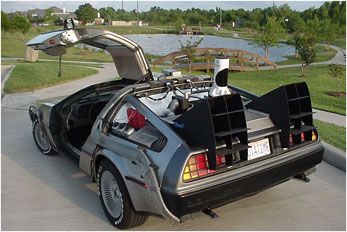 In the Back to the Future trilogy, scientist Dr. Emmett Brown built his time machine on the DeLorean. The basic premise of the time-travelling adventures were usually that the time machine would experience some technical troubles and freak accidents, hence Dr. Brown and Marty McFly would have to do some hacks to make it work. For some reason, the time machine (and hence the car) needed to travel 88 miles per hour to work.

In the film, the modifications are notable, particularly components like the “flux capacitor,” computers, and power supply. Through the trilogy, the DeLorean had been converted into a flying car from the future, and as a rail-car from the 1800s.

The flux capacitor, the most vital aspect of Dr. Brown’s time machine has also made it into pop culture lingo, having been used and cited in various media, including films, television and books. It’s quite funny to note that some people do have a sense of humor. If you search for flux capacitor on DeLorean’s online store, the thing actually appears as a part available for sale (for $0.00)! The part number is also 19851985, a reference to 1985, which is the “base” year of the Back to the Future films.

I gotta get my hands on my own time machine! I want one!