While the 1960’s Batmobile is the first in my mind when it comes to famous automobiles, the 1980’s Batmobile is by far my favorite. I grew up watching reruns of Adam West’s Batman on television almost every afternoon when I was a kid. But then when the Tim Burton directed Batman starring Michael Keaton came out in 1989, I could only be wowed by his Batmobile. I even got myself a remote controlled version as a present one time! 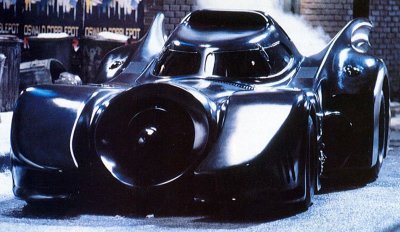 Compared to the 1960’s Batmobile, this is a closed car (better protection!). But there is no conventional door. Instead, the windshield and front part of the roof slide forward to let Batman enter and exit the vehicle.

This version of the Batmobile was built on stretched-out versions of the Chevy Caprice and Buick Riviera (cars that are often used by police forces). These cars are body-on-chassis and not unibody (in which the body itself is part of the car’s support structure), so they’re easy to stretch out and replace with different shells. All accessories of the Batmobile are functional. Yes, that includes the rear-mounted jet engine, which you see spewing out fire when the car ran at high speeds! It reportedly consumed so much fuel at a rapid rate that the Batmobile only ran for fifteen seconds with jet engaged–and this is how long each shot would appear in the film.

Unfortunately, this wasn’t the same Batmobile used in the latter movies, and I felt quite disappointed. It is said that the Batmobile was stolen, and was sighted in one episode of the TV series Lois and Clark as having been in the hands of some collectors.