I was born in the 1980’s, and just like any young boy, I was fascinated with cars and anything automotive. You’ve go TV to thank for that. I was exposed to a lot of shows on television that featured cool cars. One of these cool cars was K.I.T.T. from Knight Rider, the action-packed series that revolved around crime fighter Michael Knight and his computerized car.

K.I.T.T. stands for Knight Industries Two Thousand. (People back then were obsessed with the year 2000 or anything 2,000 for that matter. Now that it’s 2007, this no longer seems to be a big deal.) The basic premise of the show was how the protagonist Michael Knight (who catapulted David Haselhoff into fame) fought criminals with his car K.I.T.T.

K.I.T.T. was based on a Pontiac Trans Am T-top. The customizations were designed by Michael Scheffe, while later versions (the convertible and super-pursuit mode K.I.T.T.) were done by George Barris.

The car was every bit as important as its driver, because K.I.T.T. had artificial intelligence, and could do a lot of things that no ordinary car could do. 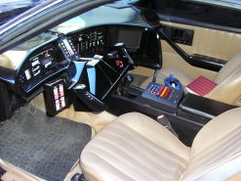 For one, K.I.T.T. could talk. And he has an almost-human level of understanding and perception. K.I.T.T. could also drive itself–the car had various levels of cruise modes, ranging from fully automatic to semi-automatic, to fully manual, where the driver has full control.

K.I.T.T. also has a molecular bonded shell plating, which protects the vehicle and the occupants from conventional munitions and explosives–and this includes the tires! Only heavy artillery and rocketes could harm K.I.T.T..

K.I.T.T. was also a very fast car, as it was powered by a turbojet with afterburners. 0-60 miles per hour could be achieved in 2 seconds, and braking distance from 70 mph is only 14 feet! K.I.T.T.’s turbo boost could also accelerate to more than 200 mph, and is usually used to launch K.I.T.T. to jump 40 feet into the air and pass over obstacles or jump through gaps in the road.

K.I.T.T. also had various sensors that let it “see,” “hear,” and even “smell” things. This exceeds far beyond human senses, since K.I.T.T. could “see” various wavelengths, including X-ray and infrared.

It is said that K.I.T.T.’s production (in the show) took about $11 million dollars, and that doesn’t include add-ons that Knight Industries have put in through the years.