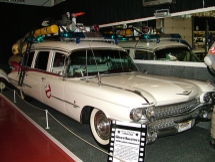 When I was in elementary school, I had much anticipation for Friday evenings because it was Friday prime time when the local stations would air episodes of The Real Ghostbusters cartoon series. I was also a great fan of the original Ghostbusters movie, and even the sequels. So you can imagine how familiar I am with the Ghostbusters universe, from the characters, to the storylines, to the equipment.

If you share the same fondness of the Ghostbusters, you might be interested in this potential catch. The Ecto-1, the Ghostbusters’ car is for sale! Remember the hearse turned into ghost-fighting machine? This is your chance to own it! Or at least a replica, that is.

From the George Barris star car collection we are very proud to offer Ecto 1, which everyone recognizes from the movie icons of the 80’s. Because of the high status and recognition of this car we choose it to represent us at the 2006 Chicago Auto Show, it was a huge hit. Not only did the car draw a constant crowd around our display but it continued to do se even after the show. This car was tailored back on an open trailer and caused a nuisance to traffic, people would ride along side to check it out, taking pictures. A rare piece, professional society ’59 Cadillac is one of the most sought after bodies of its kind. Being an exhibit vehicle it had to be premium quality and built right. All the mechanics were rebuilt with updates including a vintage air conditioning system and heavy duty alternator. Show quality paint on a rust free body, all new interior, brilliant chrome. All emergency lights work and so desirable the siren with its signature sound. A turn key, dependable auto that’s great for parades, exhibitions or your own personal collection. One of the most famous cars of all times.

Sounds good, huh? There’s one hitch, though. The asking price is $149,998! I would say that’s no big amount for a collector with deep pockets, though.

The posting might make one believe that this is the actual Ecto-1 shown in the 1984 and 1989 films, but it doesn’t seem so. According to Wikipedia, the originals are languishing in deterioration in Sony pictures’ studios, while George Barris, the famed auto “kustomizer” (who designed the Batmobile and other celebrity cars) created this replica for collectors. You can check out this gallery for other TV or movie car replicas done by Barris (like KITT from Night Rider, the Munster Koach, or Green Hornet‘s car).

Still, even if this is not the real thing, it would be one cool car to keep in your showroom!