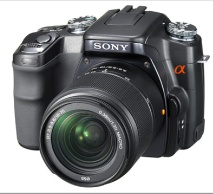 Sony is traditionally viewed as among the top, if not the number one, manufacturer of consumer-oriented digital cameras. The Cyber Shot range has been at the forefront of digicam technology, introducing many features that make the point-and-shoot experience even better at every incarnation and generation. From the smallest pocket-sized point-and-shoot T-series to the larger, prosumer F-series superzooms and then the newer R-series prosumer cameras, you can expect the best of technologies from Sony, albeit sometimes at a higher price than its contemporaries like Canon and Nikon, which are likewise very popular.

However, when you’re talking about digital single-lens reflex or D-SLR cameras, Sony always gave way to the more established Canon and Nikon brands, which compete for the top spot. Actually, enthusiasts consider these as their “religion” rather than just brand preference–you’re either a Canonite or a Nikonian. And competition is intense. This is especially since SLR cameras come with an array of accessories and lenses, which would only fit the lens mount of the brand for which is intended. Nikon lenses fit Nikon cameras. Canon lenses fit Canon cameras. Some manufacturers share mounts. For instance, Fuji D-SLRs share mounts with certain Nikon series. Sigma, a third-party manufacturer, creates lenses for Canon mounts. Other brands, like Olympus, have their own systems, as well (the revolutionary Zuiko, which is the first lens system intended for the digital-SLR, unlike other brands, which adapt to lenses intended for a larger-format film).

Hence you would expect Sony to have some problems entering the D-SLR market, the competition tough as it is. Apparently, Sony chose the way of acquisition rather than developing from scratch. Sony acquired KonicaMinolta’s D-SLR division (which is actually an earlier merger between Konica and Minolta).

Here are what people think about the A100.

dpreview thinks that the A100 is great for the serious amateur. But the A100 is not quite fully a Sony yet, as the interface and software are still reminiscent of Minolta. Still, it has its place in between the lower-end or the mid-range D-SLR markets, in terms of price.

When you first use the A100 it clearly has more Konica Minolta DNA than Sony however their influence comes in the added features and image processing (the camera’s user interface and control systems are very similar to previous Konica Minolta digital SLR’s, and that’s no bad thing).

The A100 is aimed at the ‘serious amateur’ market, however from a price point of view it doesn’t easily slot into one of the existing market segments. Depending on how you look at it the A100 is either an expensive entry-level digital SLR with an advanced set of features or a bargain in the higher segment (EOS 30D etc.), without a metal body and high speed shooting.

For me it’s a fairly comfortable Highly Recommended, the A100 is a very capable camera with a wide feature set, a good range of manual controls and some unique developments. The built-in Super SteadyShot provides you with that little extra comfort level at slower shutter speeds and the ability to use longer lenses with more confidence.

Pocket lint thinks it’s simple enough for an entry-level D-SLR, but quite clunky at times.

The Sony Alpha 100 provides a level of specification normally found on a camera costing over a £1000 more, but in a compact, fairly uninspiring (design wise that is) and lightweight body, but a body that does do the job very well indeed.

Image quality is excellent and can only be improved by better lenses as they roll out of the factory and perhaps a firmware update to help iron out that noise reduction and detail loss as well.

This is a stunning camera that will be perfect for enthusiasts on a tighter budget or anyone trading up (or across from film) and want the specification extras that this camera affords over its similarly priced competitors.

Imaging-resource had an pleasant experience during its hands-on preview.

Our few days with it showed it to be a competent photographic tool that was enjoyable to shoot, and transformed our somewhat lukewarm first impressions into respect, admiration, and a hope for a bright future for Sony’s new Alpha line. Fit and finish were excellent, ergonomics were very good, and the shots we captured with it were impressive. Resolution and color were excellent, and the anti-shake system seemed to work very well. The only weak point we found at all was somewhat high noise levels at ISO 1600, but that could easily be a result of lower-grade sensors used for the prototypes. I think it’s safe to say that there’s a lot to look forward to with such an innovative and significant force entering the SLR market, apparently with a vengeance. We think the Sony A100 will be very popular, giving the Canon Digital Rebel XT and Nikon D70 a serious run for the money. Look for our full review very soon, as well as gallery shots from a full production version even sooner.

It seems the Sony A100 will be a formidable entrant in the entry-level to mid-range D-SLR market, particularly catering to amateurs and perhaps as backup D-SLRs for the professionals. We hope to see more Sony D-SLRs in the future.

Could Sony be an opposing force to the Canon-Nikon dominance? Time will tell. But as religions go, people aren’t that quick to change.