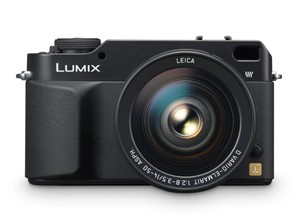 Panasonic, which has long been into the digital camera market with its Lumix line, has come up a digital-SLR of its own, the Lunix DMC-L1. It’s touted to be more film/analogue-camera-like in operation, particularly with the shutter-speed dial enclosing the shutter button, and aperture-rings on the standard Leica D-VARIO ELMARIT lens. Serious photographers, especially those coming from film photography into the fold of digital, are going to love this cam!

The Leica lens also has Panasonic’s MEGA O.I.S. optical image stabilization–great for those high-zoom shots taken at longer exposure times. You’re sure to get clear images even with jittery hands. The DMC-L1 also conforms to the four-thirds standard introduced by Olympus and Kodak for DSLRs.

At any rate, you won’t go wrong with Leica optics. This new D-SLR might be a worthy competitor to the more popular Canons and Nikons out there. With the Lumix, it’s all about the shooting experience!