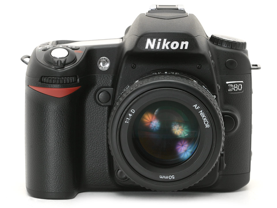 For shutterbugs, the brand of cameras and photography equipment used is not only a matter of preference, but it can be almost like a religion. As I earlier mentioned when I wrote about the new Canon Digital Rebel XTi, you’re either a Canonite or a Nikonian. It’s like the two major religions of the photography world. The other ones have their specific niches and followers. But Canon and Nikon still lead the pack in terms of followership (or worshippers?). After all, these are the ones with the widest variety of accessories and lenses that are usually compatible across product lines within the same brand.

Canon’s Digital Rebel series is considered a good entry-level set of cameras because of affordability and compact size. Of course, you can expect this series not to be as fully-featured and fast as its bigger brethren, the professional-grade digital SLRs. The camera we will be introducing here today is along the same lines as the Digital Rebel, but something that’s on the opposing side. Nikon announced just recently the D80, the upgrade to its formidable D70 introduced in 2004.

The D80 now sports a 10-megapixel CCD (up from 6 MP) and will come with new lens options included in the kit, featuring ED glass and a Silent Wave Motor (SWM) for fast and quiet zooming.

The “prosumer,” the pseudo-economic term coined in the mid-1980’s meant that an individual is both a producer and a consumer. This can either be that the individual is no longer dependent on industry for his needs, or that he can do what can otherwise be done professionally, but without the need for compensation. In short, a prosumer can be anyone from a very serious amateur/hobbyist, to someone who is just in between being a consumer or a professional in one’s field.

Hence, a prosumer camera can be expected to be more advanced than simple, consumer-grade cameras, with features and functionalities that professional-grade cameras have. However, these are a tad lower than the pro equipment in terms of performance and price. Prosumer cameras can be ideal equipment for aspiring pros who are still learning the ropes. These can also be great as alternate or backup cameras for professionals for easy switching across different lens focal lengths and features. Prosumer cams can also be ideal weekend-cameras for pros who are more used to carrying around the larger high-end cameras at work.

So, what do people have to say about the D30. For now, we’re being treated to sneak peeks or previews of early units. Reviewers have yet to get their hands on production units (meaning the same units that hit store shelves or shipped with online purchases). Previous are positive, so far.

According to Imaging-Resource, the D80 is a good improvement over the D70 in terms of handling, built and features. The D80 gets even closer to the higher-end D200 in terms of similarities in functionality, parts and interface.

Given that it uses a close variant of the CCD sensor employed in the D200 though, it seems safe to assume that it’s basic imaging characteristics will be at least roughly comparable. Taking that as a given, we’re confident in predicting that the Nikon D80 will be an enormous hit. It delivers a huge step up in virtually every parameter relative to the earlier D70/D70S, and even the D100 owner on a budget may want to consider it over the the higher-priced D200. In our limited time with it thus far, it impressed us with its solid feel and responsive handling, as well as for just how much of the D200’s capabilities it incorporates. In the back-and-forth battle between the two giants, Nikon has once again thrown down the gauntlet to Canon, with an exceptionally capable camera (sporting an unusually capable kit lens as well), at a very aggressive price.

DPreview gives a short introduction, and weighs the D80’s features against that of its precursors, D70 and D70s. DPreview notes that there are some feature downgrades, such as a slower minimum shutter speed. But overall, the D80 is a good upgrade over its precursors.

The D80 slots nicely between the entry-level D50 and the semi-professional / professional D200, clearly based on the D70 design but also different enough to be seen as a completely new model. It features a ten megapixel DX format CCD (the same we presume as used by Sony in the DSLR-A100), the metering sensor from the D50 and numerous other items taken or modified from the D200.