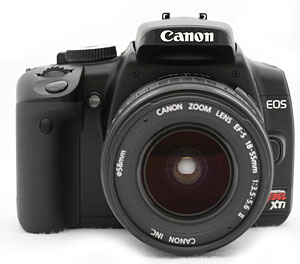 Canon is very prompt when it comes to following its product cycles for major series, particularly the digital SLR lines. Usually product lines are updated every 18 months. So this means you can expect to save up on buying last season’s models, as prices will be dropping. Of course, the newer models will usually be introduced at the same price point their respective predecessors originally held, so it pays to wait it off, unless you have a pressing need to buy your gadget now.

This September, Canon introduces the EOS 400D, or more affectionately called the Digital Rebel XTi, taking after its Digital Rebel (300D) and Digital Rebel XT (350D) predecessors. This series is Canon’s entry-level offering, which caters to users who are considered D-SLR beginners, to serious amateurs. The Rebel series also makes for good backup cameras for professional photographers due to their compact size and compatibility with Canon’s range of EOS lenses and accessories. The Rebel can be handy as a backup for quickly shifting to lenses with different focal lengths (to avoid having to switch lenses altogether) or for use on trips where no “serious” photography is required.

The original Digital Rebel (300D) is also the first D-SLR to breach the US$ 1,000 price point, and this made the camera popular among beginners and people wanting to switch from film-based SLRs to digital without breaking the bank. The relatively low price also made the camera series popular among enthusiasts for hacking, particularly because the firmware can easily be updated and even modified (note that the first digital rebel, the 300D had essentially the same functionalities as the more expensive EOS 10D, which were unlocked with some firmware hacks).

The XTi keeps the spirit of the Digital Rebel line, with a planned introductory price point similar to its predecessors–even $100 lower at that. The XTi also keeps the Digital Rebel form factor, albeit with some minor usability and construction improvements. What’s notable is the use of a larger LCD (2.5-inch versus 1.8 on the older Rebels) with a wider viewing angle (80-degrees on all sides). However, one distinguishing aspect of the XTi is its use of ultrasonic sensor-cleaning system, which is built into the sensor’s low-pass filter. Dust particles can surely ruin an image and can be very difficult to clean, especially with sensitive equipment such as digital camera sensors.

Here are the XTi’s salient features:

Canon distributed some early pre-production models for preview, and here are some comments.

Imaging-Resource gives us a detailed introduction of the XTi, approaching the preview from both a comparative point of view (relative to the 350D and other EOS cameras) and fresh looks on the new camera. The reviewers liked the introduction of the sensor cleaner and the fact that the XTi offers faster autofocus comparable to the best in the EOS line.

My first experience with the Rebel XTi was positive. It offers more of what you’d seek from a higher-end camera like the Canon EOS 30D at a much lower price. It’s also smaller and easier to bring along, which is no small consideration when you want quality pictures on vacation. It can’t quite reach to the EOS 30D’s ISO 3200 mode (it’s limited to ISO 1600), nor does it have the benefit of 1/8,000 second shutter speed (it’s limited to 1/4,000). But it has something no other EOS has: automatic dust removal and abatement technology, plus a way to digitally subtract dust when a more thorough manual cleaning isn’t possible. This important technology will doubtless make it into other EOS cameras, but for now the XTi is the only self-dusting digital SLR available from Canon.

From what I’ve seen the Canon Digital Rebel XTi will be an excellent take-anywhere all-purpose digital SLR, and will now better serve as a second camera for owners of Rebel XT, 20D, 30D, and 5D cameras who want to keep a second body with a different focal length strapped around their neck. More pixels, a bigger LCD, and dust reduction are great, but faster AF is the true benefit to the Rebel XTi.

DP review offers a basic preview of the XTi, mostly based on the Canon press release, but offers some comments, particularly on the negative side. At first glance, the reviewers missed some features thought to be basic in a D-SLR in this class.

* No programmable Auto ISO (such as seen on the Nikon D80, almost ‘ISO priority’)
* No spot metering
* Settings such as ISO not repeated on viewfinder status bar while being adjusted
* Mirror lock-up buried in a custom menu
* Hand grip virtually identical to that of the EOS 350D / Digital Rebel XT