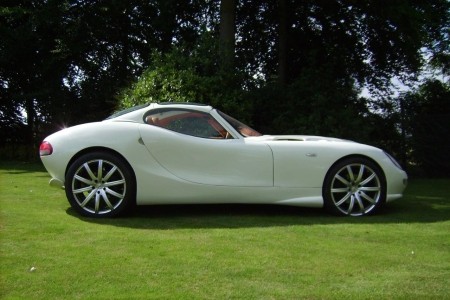 Trident Performance Vehicles have designed and produced a two-seater sports car that can reach over 200mph, get from 0-60mph in under 4 seconds and deliver up to 100mpg*.

Whilst city cars (MEGA City, Ze-O, G-Wiz) work brilliantly for people who live and work in a city, Trident represent those that travel on the M1, the M4, the M6 to get to work, people who live in rural locations and those situations where electric cars are not (for the time being) viable due to their comparitively short range. In the meantime, the Trident Iceni offers current technology that is available now which reduces fuel consumption and therefore reduces emissions.

It’s a diesel sports car and if you’re able to obtain any kind of biodiesel, this can be used without any invalidation of warranty, adjustment to the engine or affect on performance.

Their fantastic fuel economy is achieved through technology called torque multiplication and it can be applied to all diesel cars (the popularity of which is growing year on year versus petrol cars), buses, lorries and trains. It’s available now, requires no further research and development and can make an immediate difference to the amount of emissions diesel vehicles produce. In short, Trident have the solution to what we’re told is a huge problem.

So serious is the concern about carbon reduction, the Government affiliates itself with a number of organisations that exist to provide grants to people and/or companies that can contribute to or offer a solution.

Carbon Trust, EEDA (East of England Development Agency), Carbon Connections, HGCA (Home Grown Cereals Association), EEMS (Energy Efficiency in Motor Sport), Energy Savings Trust, Renewables East to name a few. Trident have applied to all the above mentioned agencies for grants and have received nothing – not a penny. Not only have they received no money but have struggled to get reasons for why they have failed and have been unable to find out who has received grants.

The team at Trident have invested £2.3m in the project which has enabled the completion of all the development needed to get the Iceni into production. They’re now seeking funds to make this happen and satisfy their growing bank of customers.

*68.9mph at a constant 70mph was the first recorded test at Millbrook Proving Ground. The figure naturally improve at lower speeds – at 30mph, Trident’s initial tests returned 108mpg. This is yet to be confirmed but they don’t believe in quoting a figure for 30mph as this is unrealistic – unless you drive exclusively in a city.

The Iceni is a traditional grand tourer. With a full tank of diesel, you can expect to travel around 2000 miles without needing to fill up. The boot has space for luggage and golf clubs – enough for a two week holiday. The chassis is made from stainless steel and is guaranteed against corrosion for 100 years and the body is made from composite and can therefore never rust or degrade.