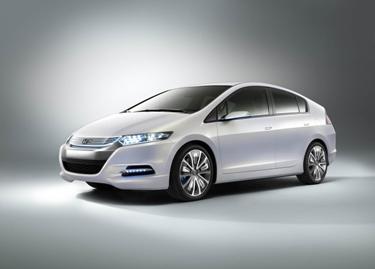 Takeo Fukui, President and CEO of Honda Motor Co. said: “The original Honda Insight launched in 1999, was the pioneer of hybrid technology in Europe and remains an iconic symbol of Honda’s environmental innovation. “This new Insight will also break new ground by providing an affordable hybrid to an expanded number of customers craving great fuel economy and great value.”

Positioning
• It will be significantly lower in price to any other hybrid on the market
• By offering a more affordable hybrid that’s accessible to more people, Honda hopes to attract a new section of the market to petrol-electric technology – those car buyers who have never considered a hybrid car before
• The price will be announced at a later date

Specification
• The car will be a 5-door family hatchback, capable of carrying five people
• It will be smaller than the Honda Civic Hybrid
• The Insight is based on a completely new platform
• The car takes many exterior styling cues from the FCX Clarity, Honda’s hydrogen-powered fuel cell car, which is currently being leased to customers in the United States
• The control unit and battery for the IMA system are mounted beneath the boot space to give the Insight both a low centre of gravity and the practicality of a conventionally-powered hatchback.
• The Insight has a unique function to assist more fuel efficient driving – helping drivers to maximise their real world fuel consumption

Predicted sales
• Honda aims to sell 200,000 Insights a year, globally
• Over the next few years, Honda will also launch a sporty hybrid (based on CR-Z), a Jazz Hybrid and a new Civic Hybrid
• With these four hybrid cars, Honda will sell over 500,000 hybrids globally per year
• 10 per cent of global sales will be hybrid by 2010

Production
• Production costs will be significantly reduced. Honda has further advanced the equipment and processes used to produce the electric motor.
• A new production line will be added to the Suzuka factory, in Japan, to double the per hour production capacity

The 1999 Honda Insight
• The first Insight was a two-seater hybrid coupe launched in 1999
• It was the first mass produced hybrid to be sold in Europe
• Honda sold 17,000 Insights worldwide and 400 cars in Europe