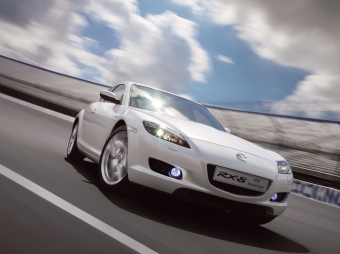 To celebrate a unique anniversary – it is 40 years since Mazda launched its ﬁrst rotary-powered car, the Mazda Cosmo Sport back in 1967 – Mazda is releasing a strictly limited number of its latest rotary model, the Mazda RX-8 40th Anniversary Limited Edition. Just 400 examples of this very special four-seat coupe model will be available in the UK, priced at £24,595 (on-the-road), each identified by its own unique number.

Based on a special concept car first presented at the Goodwood Festival of Speed earlier this year, the Mazda RX-8 40th Anniversary Limited Edition adds components to the chassis and body shell, and special exterior and interior features, which create a unique sports car and one that is a fine tribute to Mazda’s rotary engine history. Mazda is Britain’s favourite sports car brand, supplying one in every five sports cars sold in the UK, so this latest model is sure to be in high demand.

“The fact that the Mazda RX-8 can truly seat four adults in comfort is a real and distinct advantage over the competition, and demand for it remains strong with more than 2,800 units registered so far this year,” comments Rob Lindley, managing director for Mazda UK. “Since its launch in 2003, the Mazda RX-8 has changed the face of the sports car market in the UK. It brings real motoring excitement to everyday family life and thanks to the sporty coupé’s unique practicality, has carved a whole new segment in the market. Now, the new Mazda RX-8 40th Anniversary Limited Edition celebrates this model’s immense appeal.”

The unique exterior features of the Mazda RX-8 40th Anniversary Limited Edition include a choice of two exclusive exterior colors – a newly-developed Metropolitan Grey Mica that gives a strong touch of sophistication; and a truly distinctive Crystal White Pearlescent that will make this a ‘stand-out’ car on Britain’s roads.

Special Trim and Cockpit Enhancements
Inside, the Mazda RX-8 40th Anniversary Limited Edition features seats trimmed in black leather with stone Alcantara® centre sections. For an extra touch of quality, the steering wheel is black leather – to match the seats – with stone stitching to match the seat centre section colour. The handbrake and gear lever are trimmed in the same black leather with stone stitching and the lever top features a white centre insert. Luxury carpet mats display the limited edition logo and bespoke stainless-steel scuff plates incorporate a 40th Anniversary Rotary Engine legend together with each cars’ unique number – starting at 001/400.

Uprated Sports Suspension
With its ‘front-midship’ engine layout, rear-wheel drive, near perfect 50/50, front/rear weight distribution and the outstanding torsional rigidity of its four-door bodyshell, the Mazda RX-8 is one of the very best handling cars in its class.

For the Mazda RX-8 40th Anniversary Limited Edition, the regular Mazda RX-8’s handling is further enhanced by the fitting of uprated Bilstein dampers all around. To reduce NVH and improve refinement, as well as improve upon an already impressive ride, the front suspension cross members are ﬁlled with polyurethane foam for an even quieter ride over harsh surfaces. These changes, together with the generous tyre specification – 225/45 R18 front and rear – deliver even more Zoom-Zoom driving dynamics.

The drivetrain features the twin-rotor High Power 231ps RENESIS engine mated to a short shifting six-speed manual transmission. The Mazda RX-8 40th Anniversary Limited Edition accelerates from standing to 62mph in just 6.4 seconds and is capable of a top speed of 146mph.

Award-winning and popular
Since the Mazda Cosmo Sport went on sale on 30 May 1967, Mazda has manufactured more than 2.0 million rotary-engined vehicles. After the launch of the Cosmo Sport, Mazda built and sold a series of now-legendary rotary-powered RE vehicles like the Familia Rotary Coupe, Savanna, RX-7 and Eunos Cosmo.

This tradition culminated in 2003 with the launch of Mazda’s sports car icon, the Mazda RX-8, which features the revolutionary RENESIS rotary engine under the bonnet, a product of 40 years of continuous work and meticulous research and development. This engine won the International Engine of the Year award in 2003 along with three other category awards in both 2003 and 2004. Today, Mazda is the only carmaker in the world to mass produce rotary engine vehicles.

If you want a coupe with a difference that simply loves to rev, then look no further than the RX-8. It really is a very special car indeed.