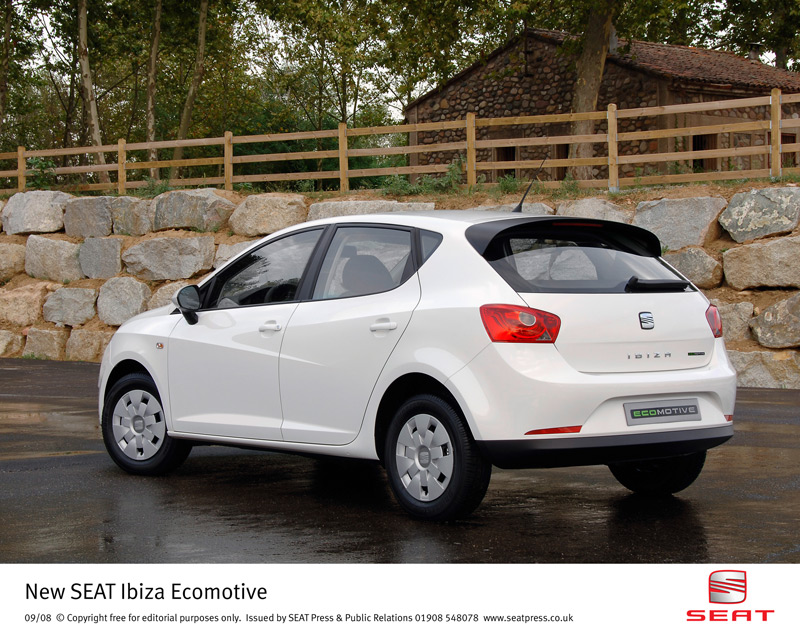 Never one to rest on its laurels, SEAT will be expanding its recently-launched Ibiza line-up at the forthcoming Paris Motor Show, with the unveiling of the fire-breathing Cupra and ultra-green Ecomotive models.

Set to make their Show debuts on 2 October, the Cupra and Ecomotive are highly significant additions to the sharp-looking new Ibiza range – at a stroke, they become respectively the meanest and greenest versions of SEAT’s supermini.

The Cupra is brimming with sophisticated technology.  It uses a 180 PS 1.4-litre petrol engine, featuring not only a turbocharger but also a supercharger, an approach beneficial to both power delivery and fuel efficiency.  Furthermore, this compact yet potent powerplant is mated to a seven-speed DSG (Direct Shift Gearbox) transmission, complete with F1-style steering wheel shift-paddles.

As expected from the Spanish brand whose ethos is ‘auto emoción‘, the new Ibiza Cupra has style to match its spirit.  Based on the SportCoupé (SC) three-door body shape, the Cupra boasts a bespoke look, with a new front bumper and air intakes surrounding the grille.  Eye-catching 17” alloy wheels, a rear diffuser incorporating a centrally-placed trapezoid exhaust pipe, Cupra sports seats and track-inspired aluminium pedals are other visual highlights penned by Luc Donckerwolke, SEAT’s Design Director whose curriculum vitae includes the Lamborghini Gallardo and Murcielago.

The other high performance Ibiza – though in this context performance is measured in mpg rather than mph – is the next generation Ecomotive which, just like the current model, has an official carbon dioxide emissions figure of just 99 g/km.  That is currently the joint lowest figure of any internal combustion engined-car available in the UK today, which means that the Ecomotive will once again qualify for free road fund licence.

Available in both 5dr and SC versions, the Ibiza Ecomotive is equipped with a clean and frugal 80 PS 1.4 TDI engine with DPF diesel particulate filter.  Its notably low fuel consumption and CO2 emissions are achieved through engine software modifications, as well as enhancements to the gearbox and gear ratios, the fitment of new 175/70 R14 low rolling-resistance tyres and the substitution of the spare wheel for a puncture kit.

Aerodynamic performance has also been analysed, resulting in a new closed front grille and revised rear spoiler which combine to reduce air resistance. Naturally, these changes do not affect the Ibiza’s extrovert appearance, meaning that the Ecomotive is arguably the sportiest-looking small eco-car on the market.

Both prices and specification for the new Ibiza Cupra and Ibiza Ecomotive will be announced closer to their UK arrival towards the middle of next year. In the meantime, all current Ibiza Ecomotive models are available with 0% finance (over 3 years, with 35% deposit) – a hugely attractive deal for financially and environmentally aware buyers, who will already benefit from the car’s road tax exemption and 74.3 mpg fuel economy.