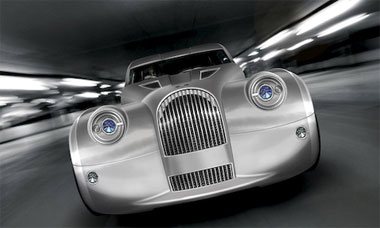 Now, what on Earth is a company like Morgan doing producing a hydrogen-engine based variant of their amazing looking Aero 8 (which was once a concept and got produced to almost exactly the model shown)? Well, frankly I have no idea. Nonetheless, they have gone and done it.

Granted, the Life Car is not only the work of Morgan exclusively. Oscar Automotive, QinetiQ and Oxford University have all been working on this goal of a zero-emission vehicle that proves to be more than zero fun to drive – unlike say the Toyota Prius which frankly in testing didn’t even prove that much more economical (in fuel and omissions) than a Fiat Panda 100HP.

Anyway, back to the Life Car. As with all Morgan vehicles, it is built on an ash frame with aluminium, making the car both light and stable. For this particular vehicle, things have been taken a step even further, with the seats being made from sprung wooden ply and then being covered in leather padding.

Morgan cars are interesting anyway, not least because of their styling. You’ll no doubt have noted the somewhat retro 50’s look – along with the purposeful front end and low ride height. This vehicle joins a few others as being what could be the future for both green targets and driver satisfaction.