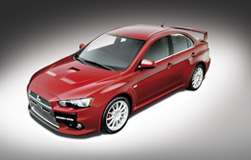 The picture you can see above is none other than the Mitsubishi Evolution X. It is, as the name suggests, the tenth iteration of the amazing supercar beater from Mitsubishi. I’m sure you’re thinking ‘how on Earth can an aggressive looking saloon beat something like a Lamborghini?’ Well it’s a fair question. The answer however is a little more complicated than it just can.

History
Mitsubishi Motors is the sixth largest Japanese car manufacturer, with a long history dating back to 1917. The motor sport section of the brand debuted back in 1962, with a Mitsubishi 500 Super DeLuxe. It won various accolades and moved into WRC (World Rally Championship).

During the 1980’s Mitsubishi launched the Lancer EX2000 Turbo, which it scored extremely well with. The company went on to have a very successful partnership with Tommi Makinen, resulting in four years of consecutive firsts (1996-1999) in WRC. Thus, the legend of the Mitsubishi Lancer Evolution was born.

Reasons Why The Car Is Popular
Back in the day, Mitsubishi homologated (registered for production) the Evo. What this meant was that apart from the bodywork, the engine had to meet a certain spec. Thus, the 2.0 litre was maximum size but to gain greater power, a huge turbocharger was fitted. This was matched with a clever four-wheel drive system to glue the car to the road and ensure maximum grip.

The Mitsubishi Lancer Evolution X
The car is primarily known for speed – acceleration and top end. People who buy the cars are enthusiasts at best and nutters at worst. The new version is no exception. It is very evidently much more aggressive (just look at those intakes, the rear end downforce-creating spoiler and diffuser, plus the huge wheels).

Bodywork colour is nice, and the overall image is of a purposeful and squat car ready to storm off. So, job done there then. Interior wise, unfortunately there are still hard (cheap looking) plastics – something I’ve seen on both American and Asian cars but something that I’m also still not fond of.

Equipment wise you do get your Xenon headlights, your Recaro (sports) seats, Bluetooth and MP3 stereo. Unfortunately, it costs more for the sat nav and the hard drive to store your CD’s on. Inside is comfortable and space is good, though the bulkhead and the battery inside for weight distribution take the boot up somewhat.

Performance
The Mitsubishi Lancer Evolution X is a car to be driven. Whether you get the FQ300, 330 or 360, you’ll be amazed at the dizzying performance. Even with the ‘basic’ FQ300, you’ll still see it burning up the road, moving from 0-60 in 4.7 seconds. More than frantic I’m sure you’ll agree.

This is a car with more acronyms than you can possibly guess at. The six speed auto gearbox will help to propel you along, whilst the Super-All-Wheel-Control should mean that you never have too much of a worry. Frankly, if you have managed to break grip in this car you’ve probably done something incredibly stupid.

What Doesn’t It Do Well?
Apart from the interior as mentioned, the real problem with the Mitsubishi is that it remains very much the same. It is an incredible performance saloon that will be quicker than (in any guise) almost any car on the road today. It doesn’t matter which car pulls up at the lights with you – you’ll be able to storm away faster.

Conclusion
To put it bluntly, the Mitsubishi Lancer Evolution X is a car with a purpose. That purpose is to provide an entertaining and engaging drive capable of extremely high-speed acceleration. You’ll be able to take it on track days and not have to worry about being shown up – even average drivers will perform rather spectacularly. On the other hand, if you baulked at the price, don’t even consider getting one. The service charges and fuel economy will make you cry. For the rest of you though who like your cars – this is one to really go for with all the passion it will provide.