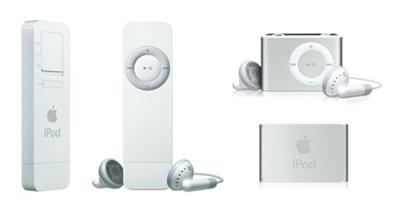 When the iPod Shuffle first came out, it wasn’t exactly revolutionary. Flash-based MP3 players have been available for quite some time already, and the Shuffle even lacked the functionalities and features that most of its competitors had. It did not even have an LCD screen. But of course, it was an iPod–there’s value in the brand! And then the Shuffle proved useful to those who wanted a no-frills player that you can take anywhere (you won’t have to worry about broken screens and crashed hard drives, after all). And yes, it worked with the iTunes Music Service!

Then, the second generation came out. Now that’s more revolutionary and innovative. The size had been reduced dramatically, and the Shuffle was constructed of better material (aluminum instead of plastic). It’s so small you could literally clip it anywhere and almost not feel it.

What’s the next step in this evolutionary process? Eye-candy! Apple recently announced that the Shuffle now comes in color!

The new Shuffle colors resemble those of the second-generation Nanos, except for the black and red (red being released as a special series for Charity). Of course, it’s nothing really new in terms of practical and technical aspects. But for the fashion conscious, having a choice of colors helps! And for those households whose family members own several iPods (one or more each), having different colored gadgets sure helps identifying which is which. Trust me, I’ve had siblings accidentally switch iPods often (and they have drastically different music tastes!).