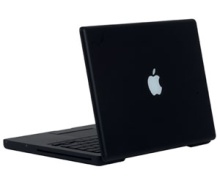 It doesn’t exactly sound as cool as saying “iBook.” It’s as awkward to say “MacBook” as it is to say “MacBook Pro.” Whatever happened to “PowerBook?” That had such a nice tone to it.

Great name or bad, though, we’ll have to live with what Apple has branded its latest breed of entry-level and consumer-oriented laptops, the MacBooks. It seems that black is the new white is the new black with the case of the MacBook, as Apple has come out with black, matte MacBook models (as compared to the white-only iBooks of the 21st century). The black models even fetch a heftier price tag, which some consider to be unjustifiable, given that the only upgrade over the next lower-priced white one is 20 Gigs of hard disc space.

Still, the entry-level MacBook is priced at a reasonable $1,099. At this price point, it competes with low- to mid-range models from other laptop manufacturers. But hey, it’s an Apple, and it’s a class in itself.

Is the MacBook a worthy buy? Here are some reviews that might help shape your opinion.

There’s a lot to love about the artfully designed MacBook, both in terms of price and performance. It’s a great buy for general home use, and it would make an excellent gift for a grad ready to leave for college. Professionals on a budget could use this system if they wanted to, but we’d suggest that they stick with the more powerful and versatile MacBook Pro.

Pocket-Lint reviewed the MacBook a while back (with particular emphasis on the black model):

We like the black, but it smudges easily. We like the white, but are sure that it will just become dirty like the previous iBooks did a couple of months in.

Then there is the screen. We certainly like it and the new brightness over previous PowerBook models however the screen is reflective in sunlight more than we would have liked.

The list goes on. We like the keyboard, but are worried about the gaps between the keys catching biscuits crumbs. Like the performance, but not when it comes to doing anything heavy duty like games.

Overall then, the MacBook is a mixed bag. If you are an occasional user looking for laptop that is perfect for doing basic entry level things such as basic photo editing, emailing and watching the odd movie then the MacBook is certainly one to look at.

The price while expensive for an entry level laptop, certainly compared to a PC variant, is to a point justifiable as the MacBook does have more flare about it than something that will cut your fingers every time you try to turn it on.

There are the pros and cons. But the general verdict seems to be that the MacBook, while priced a tad higher than models with comparable specs from elsewhere, is an OK buy for casual users, or people who wouldn’t be burning their processors and graphics accelerators with high-end requirements. At least no one is bashing the MacBook as much as the MacBook Pro, as with Elliott Back’s recent top-10 list why not to buy a MacBook Pro!