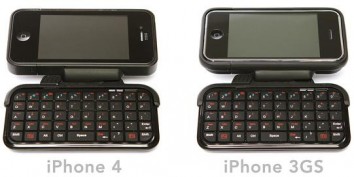 I was quite impressed when the first touchscreen phones appeared on the market. It presented a completely new paradigm for controlling phones and opens up the phone platform for its eventual evolution as a mobile computer.

But one thing that became immediately apparent when I handled my first touchscreen phone is that without tactile feedback, it is quite strange to type on a virtual keyboard. You don’t know if you’re pressing the correct buttons and with a cramped space on which to put virtual keys that must be large enough to get accurate button presses, it is hard for people with large fingers to use touchscreen phones. It’s a common complaint from people who use touchscreen phones like the iPhone.

This complaint may have been heard far too often enough that a company has made the very cool iPhone Flip-Out Keyboard. This is a great gadget that adds a QWERTY keyboard to your iPhone. The device connects to your phone through a Bluetooth connection. The whole device looks quite stylish. You attach your phone at the top of the keyboard and when you need to type on it, you flip the phone out to use it. It moves as seamlessly as other flip-out type phones currently on the market. Yes, it does make the iPhone more bulky, but anyone who has to suffer through the humiliation of erroneously typing a message because of a hard to use touchscreen keyboard won’t mind the added bulk if it means more accuracy in typing. The keyboard is securely attached to the back of the iPhone via the use of magnets, which prevents the phone from flipping out on its own. The keyboard is powered by its own rechargeable battery so it doesn’t leech power from your iPhone.

The iPhone Flip-Out Keyboard is available for both the iPhone 4 and the iPhone 3GS.