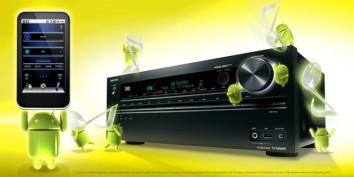 Onkyo is a company that has built a well respected brand based on high quality, high fidelity audio equipment. It’s considered as one of the top brands to consider if you’re looking to build an audio setup. Onkyo has introduced some innovations in the audio equipment a number of times but their newest innovation comes left of center – a new remote.

Onkyo has announced that it will be releasing a new remote control that will control Onkyo audio / video receivers. A “universal” remote is not really big news but the path Onkyo is taking to provide a universal remote for its products is quite daring because the remote is not going to be a physical remote control. The new remote Onkyo announced will come in the form of an app that can be downloaded to Android smartphones, which will be made available at the latter part of the year. A n app remote is a brilliant idea because it saves a lot in manufacturing costs, is more environmentally responsible, and eliminates once and for all our mad search for remote controls in our rooms whenever it gets misplaced (unless of course, users start thinking of their phones remotes and start misplacing them too).

This new app will also allow for other functionalities. For example, with the app Onkyo owners will be able to stream content from their Android phones or devices directly to their Onkyo equipped home theaters.

Onkyo said that the app will be able to control all of the company’s networked audio video receivers released for this year. As an added treat to Onkyo owners, the app is going to be made available for free when it is released tentatively next month. Offering it for free is good gesture from Onkyo. The cost of audio video equipment is already very expensive so offering something for free is a great gift to loyal Onkyo owners.